Centre for the History and Analysis of Recorded Music 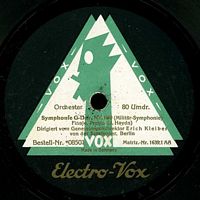 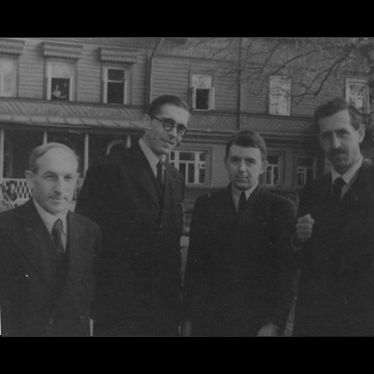 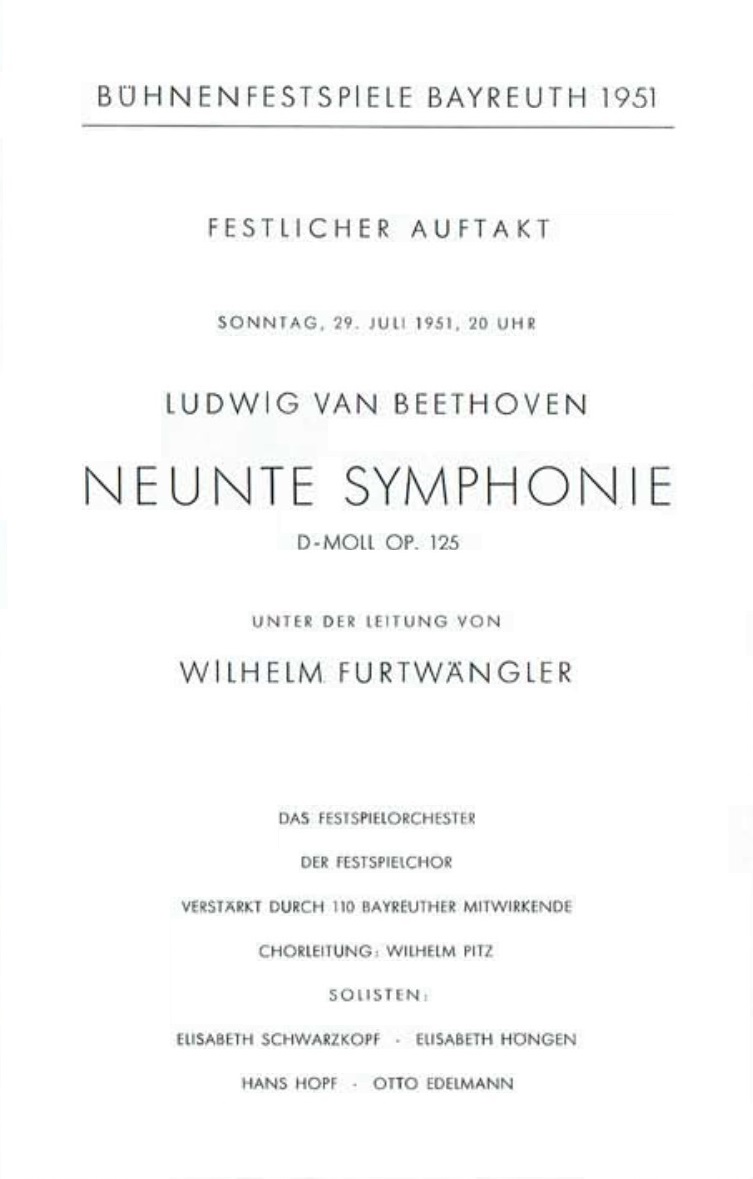 The Swedish record company BIS has recently issued both as a Hybrid SACD (BIS-9060) and as a Hi-Res download (24 bits/96 KHz) the recording made by the Swedish Radio of the Bavarian radio (Bayerischer Rundfunk) live broadcast of this concert, which has unexpetedly survived in its Archives.

It is known that the EMI issue is an edited version which, according to Henning Smidth, is comprised mostly of rehearsals and only partly of the July 29 concert. Said rehearsals are most probably those held on the morning and on the afternoon of the concert, because on July 27, the day Furtwängler arrived at Bayreuth, and on the 28, the first rehearsals took place in another acoustically different hall (see the picture above) and, according to Klaus Lang, with a somewhat different orchestral setup than the classical one for the concert.

For this first postwar Festival, the orchestra was comprised of a total number of 150 musicians, of course not all of them playing here, coming from 40 different orchestras from West Germany (BRD), including Berlin, and East Germany (DDR). For the Ninth Symphony, the choir was comprised of 150 choristers from the German Operas, augmented by 110 choristers coming from Bayreuth. All these musicians were assembled on the stage and on the covered orchestral pit. One easily imagines what tour de force it meant from the point of view of conducting technique to built up in such a short time this performance with such a huge number of performers coming from so many places and who had never played together.

I- The letters between Wilhelm Furtwängler and Wieland Wagner:

Wieland Wagner could only obtain from Furtwängler to conduct in Bayreuth this Ninth Symphony. He also refused to conduct a second performance on August 20.

As to the soloists, Wieland Wagner did not succeed in convincing him (letters of February 5 and March 24, 1951), while Anton Dermota who was Furtwängler’s choice was not vailable, to choose Wolfgang Windgassen and George London he thought would be better, instead of Hans Hopf (whom he called « Naturbursche ») and Otto Edelmann who moreover had to rehearse and sing soon after in Meistersinger. For the Ninth, their day was to come later, in 1954 with Furtwängler for Windgassen, and in 1963 with Karl Böhm for London.

II- The live broadcast by the Bavarian Radio:

The concert was broadcast in Germany by the Bayerischer Rundfunk (Munich) and by the SDR (Stuttgart); in Austria by RAVAG (Radio Wien Sender II), Sendergruppe Alpenland (broadcasting stations of the British occupation zone) and Sendergruppe West (broadcasting stations of the French occupation zone); in France by RTF (Chaîne Nationale); and in Sweden by Sveriges Radio (Stockholm, Hörby). 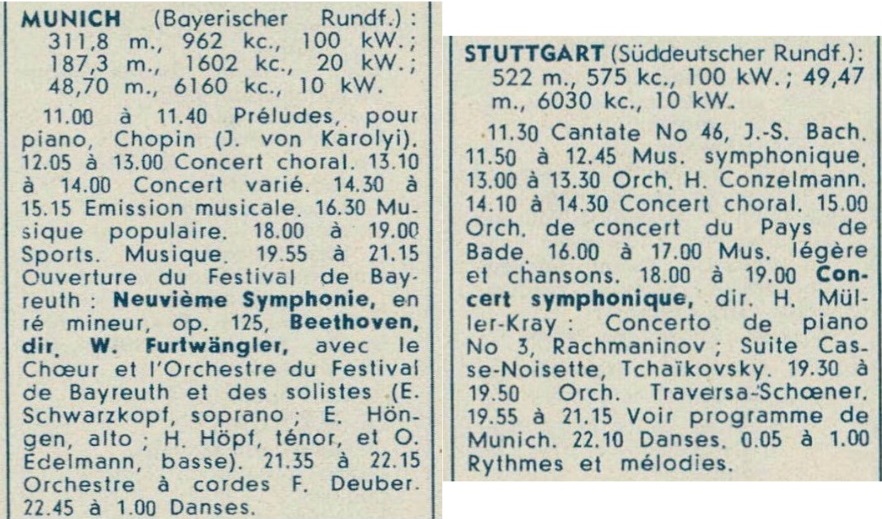 The high technical quality of this transmission is probably due to the fact that the Bavarian Radio had since August 18, 1950 a Frequency Modulation (FM or UKW) broadcasting station. The reason was that, after the war, the Allied occupation forces had requisitioned a certain number of Amplitude Modulation (AM) frequencies, and thus, the only solution found by the German Radios tto overcome the shortage of frequencies was FM, hence a paradoxical technical advance. Indeed, in other countries, it was not before 1954-1955 that this technique was implemented. In other countries, like Switzerland, there already existed a technique allowing a better quality than AM, namely telediffusion. It allowed to subscribers to receive the broadcast signal by cable on their telephone line.

III- The reception and recording by the Swedish Radio (Sveriges Radio):

To travel from Bayreuth to Stockholm, the broadcast signal had to travel (via Munich) through cables over a very long distance, and to go through a great number of relay stations to re-amplify the signal to compensate for the attenuation of the signal along the cable.

The Swedish Radio had since long AEG Magnetophones K4 (R22), but to keep the recordings, it rather used 33rpm direct cuttting discs, a US technique it already used during the war to exchange with the US Radios. The concert Furtwängler gave in Stockholm on September, 25 1950 with the WPO was still archived using this technique. 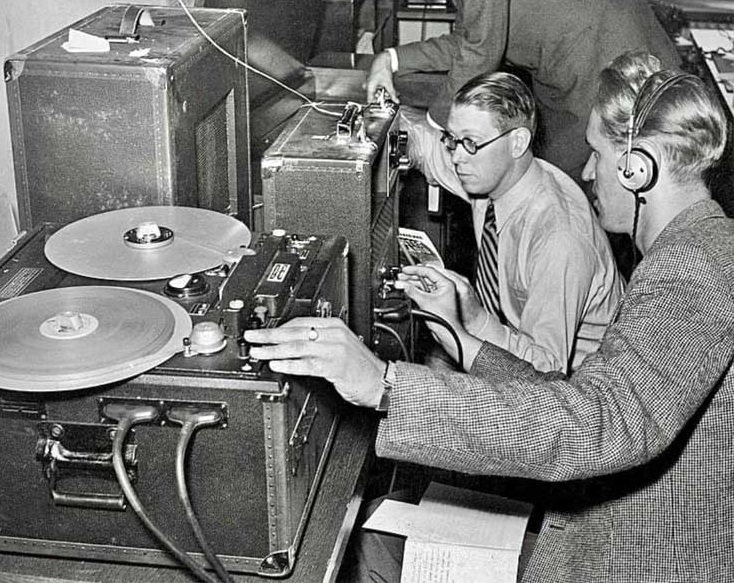 Swedish Radio during the war. From left to right: Henrik Hahr and recording engineer Hans Sjöström

The Swedish Radio also had steel tape recorders called Blattnerphone or Marconi-Stille, and the known information was that the direct cutting discs of the Furtwängler Stockholm concerts given in 1942-43 had been transferred from such tapes. However, the analysis of the technical data of this equipment both from the point of view of dynamics and bandpass makes this idea moot.

In 1951, the Swedish Radio started using modern tape recorders to keep recordings and it is to this evolution that this astonishing document is supposed to be due. Is it really true?

IV- The publication by BIS as SACD or Hi-Res download:

This recording as published by BIS is comprised of the complete broadcast including the announcements and applause: 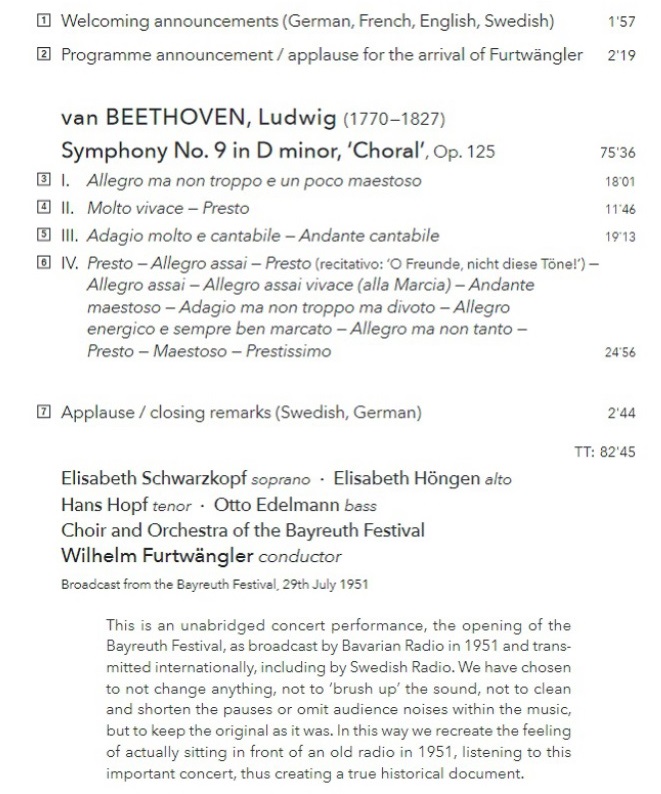 The site HighResAudio allows to read the booklet online:

The BIS booklet bears the mention: Original format: analogue mono tape, digitized by Swedish Radio in 24-bit / 96 kHz, without any other information. Note however that BIS had the excellent idea of proposing the document « as is », namely without any treatment or filtering whatsoever.

However, if electronic noise characteristic of a long distance transmission is heard, surface noise characteristic of the cutting of a mechanical surface is also present. As a consequence the tapes digitized by BIS are most probably a transfer from an original support (discs or Philips-Miller tape) which anyway is vastly superior to the one that was used soon before for the said concert of September 25, 1950*.

The technical quality of the document proposed by BIS is surprising, from the point of view of definition, especially hall ambiance, dynamics (quite huge) as well as bandpass. A  comparison shows this document as being almost as good as the best issue of the tape from the Bayerischer Rundfunk, namely the superb (and also unprocessed) SACD WFHC-030 (Wilhelm Furtwängler Center of Japan), and the background noise from transmission and from the support have an astonishing low level. The analog defects from the long distance transmission preserve the integrity of the musicality of the sound (hear the subtelty of the pianissimo playing of the theme at 3’05 into the Finale), whereas an even moderate digital noise reduction treatment, had it been applied, would have damaged the musicality of the sound. From BIS, a masterful lesson of music as well as of psycho-acoustics!

* There is however in the Finale an important loss of sound quality after the tenor entry. 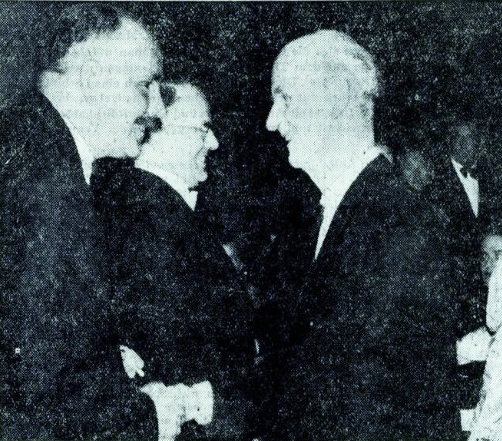 At  the end of the concert, Furtwängler shakes hands with Dr. Franz Strauss, son of Richard Strauss

Thank You for these amazing informations 🙂 just listening the recording.

What I mostly like about this version of the opening concert of the Bayreuth Festival 1951 is the authenticity of the sound, totally unmanipulated!
In my point of view this performance is far superior to the version created by Walter Legge for HMV.

Yes, it is a great surprise to have at last on a commercial CD the real Furtwängler sound unaffected by the all too often ill-used software re-mastering, such as (for me ) the overprocessed Warner Boxset where the tonal balance has been changed without any explanation, so that the sound lacks its typical depth, a pity for Furtwängler.
I hope BIS will publish in the same way the remainder of what the Swedish Radio has, and even other unlisted discoveries….

Centre for the History and Analysis of Recorded Music